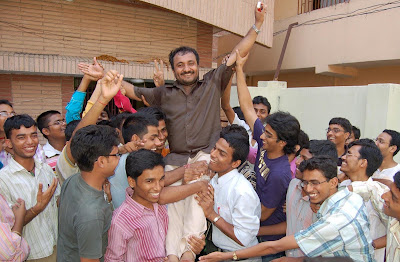 Super-30 has got yet another feather in its cap. The US based 'Time' magazine has included it in its ‘Best of Asia 2010’ list.

The Super-30 coaching centre’s ticket to fame is 100% success rate of its students in cracking India’s toughest exam to secure a place at the premier Institute of Information Technology (IIT) for three consecutive years since 2008.

The centre was founded by Anand Kumar, 37, in India’s eastern state of Bihar’s capital Patna in 2002. The news of this latest international honour has brought cheers to Kumar and his students.

“We are very happy to hear this. We are happy for the students. Our students from all over the world are calling up and congratulating us,” says Kumar excitedly over the phone.

However, “what makes that feat even more remarkable is that these (its) students are the poorest of the poor who would otherwise never be able to afford full-time coaching," says the magazine.

Kumar along with his coaching staff scouts through the least developed pockets of the state and handpicks 30 bright students from financially and socially backward strata of society.

Once selected, these students are provided free food, lodging and coaching for IIT’s examination test. The one-year coaching is intensive.

The centre provides the students with one single lifetime opportunity that can potentially transform their life. These children of rickshaw pullers, fruit and vegetable hawkers, daily wage labourers, auto drivers, kiln workers, marginal farmers know it’s an opportunity to swim or drown. If they seize this one chance it can drive them out from their destitution.

This single hope motivates them to do their very best. During one year at the centre, the students completely cut themselves off from the world. “They don’t watch TV or movies, read newspapers or magazines. They don’t visit their parents during festivals either. They just immerse themselves in studies with a single goal— to find a place in IIT,” reveals Kumar.

The students are coached in Physics, Chemistry and Mathematics for four hours, five days a week. However, Mathematics is the main thrust area. To sustain the interest of students, the teaching staff makes learning interesting and simple.


“We explain them in depth and in an interactive way, clarify various concepts and their applications in various problems,” says Kumar.


Apart from teaching, the Super-30 teachers have a task without which coaching wouldn’t yield desired results. That is to boost the morale and self respect of these students.

“Somewhere they are conscious about their background. When they first come to the centre they are shy and nervous about the challenge of getting through the IIT test. The fear has to be removed from their mind and heart. So we condition them psychologically that they can do it,” says Kumar.

Apart from the rigorous coaching, the students have to write two tests on weekends. According to Kumar, the tests comprise challenging questions.

The weekly brain racking tests through the year make students so thorough in their subjects that writing an IIT test becomes a cakewalk for them.

According to Kumar, the students are self motivated and study for 16 hours a day. They discuss various problems and solve it among themselves. Since all of them have high IQ level they are almost at the same wavelength while discussing problems.

However, girls are in minority in Super-30. To increase girl students’ intake, the coaching centre gives them relaxation in marks. “Still we don’t get more than two girls each year on an average. Unfortunately, their parents don’t encourage them as they think they will be married.” 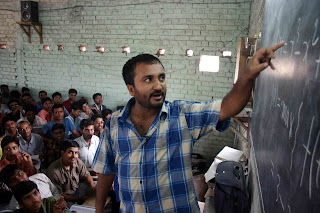 It was Kumar’s own experience that inspired him to give free education to economically weak but talented students. A Mathematics wizard, Kumar got his papers in the subject published in Indian and foreign journals while he was still doing his BA in 1993. He says he could not afford to go to bigger universities in Delhi or Mumbai because he did not have enough money. This was the very reason why he could not join Cambridge either in October 1994 after securing a place in post graduation Mathematics study. His father’s death just before his departure for England ended his last hope of pursuing higher education. He had to stay on in Patna to help his family earn a living.

“While in college I already used to go out on my bicycle to sell ‘papad’ (paper thin lentil crisps which needs to be roasted or fried) which my mother used to make at home. This was the only source of our livelihood,” recalls Kumar.

However, while living in a hand-to-mouth situation, he kept his passion for numbers alive. He used to solve Mathematics questions with his friends in Ramanujan School of Mathematics which he had formed in 1992 in college. In his spare time he used to teach poor kids for free.

In 1995, he seriously thought about teaching Mathematics regularly and making it a source of his income. His friends Amit Kumar, Praveen Kumar and Neeraj Pratap Singh suggested him to teach Mathematics while they would teach Physics and Chemistry to students. So along with his friends he started offering tuitions to students while continuing his free education for the needy children.

It continued till 2000 and by then Ramanujan School had already become famous for its teaching standards. At that time he used to charge Rs500 each student to be able to fund poor students’ education.

Poverty all around him inspired him to do more each time he saw some talented but helpless student. In 2001, Kumar met a potato farmer’s talented son and realised that he had no money to pay for his fee, rent or food if he shifted to Patna from his village. Kumar did not let go such a talent waste.

He designed a project where he would provide free food, lodging and coaching to talented but needy students. It was supported by his family and fellow colleagues at the centre.

“My mother got ready to cook for them, my brother, Pranav Kumar, a violinist in Mumbai, said he would help me and my colleagues were ready to teach them Physics and Chemistry for free and I took care of Mathematics,” says Kumar.

To support a batch of 30 students, tuitions are given to 400 students for Rs6,000 each per year. However, most of his time is dedicated to the Super-30 centre. When he is not giving tuitions in the evening, he spends time with his two-year-old baby and wife. Even while at home he devotes four hours every day to prepare new questions for weekly tests. He says it’s possible because of the cooperation of his “loving wife”.

This year, Kumar wants to increase the Super-30's strength to 60 students and employ additional teachers and other staff members. To support the coaching centre, he will have to give tuitions to 100 more students.

At the moment, hunt for Super-30 students is on in states like Bihar, Jharkhand, Uttar Pradesh and Punjab. The classes will begin in July.

According to Kumar, super-30 has given him a new aim in life. “It has changed my life. When I could not go to Cambridge, I was disappointed. I always wanted to be a Mathematics teacher in Cambridge, Yale or IIT. I could not go there but I’m able to send my students there,” says Kumar proudly.

Recalling the proudest moment in his life, he says, “One day a kiln worker’s son Suresh Kumar came to us. We had taught him for two years as he needed extra coaching. And now he had cleared IIT. His father did not know what IIT was but he knew his son had achieved something big. The father and son got us some sweets and both of them could not stop but crying with happiness.”

Suresh Kumar and the likes of him would remain thankful to Super-30 for making a difference in the lives of those who could otherwise never think of making it to IIT.
Posted by hemlata at 22:59