Singing voices of the gramophone era 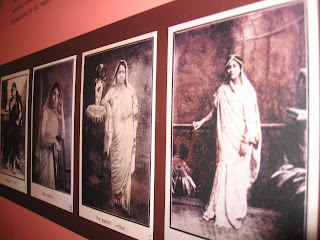 Gramophone did it what kings and patrons could not do to promote melodious ‘baiji’ or ‘gaanewali’, also known as ‘tawaifs’ and give them the due credit of respectable and professional women singers.
That was the era of early 20th century.
Listening to public women singers in their places known as ‘jalsaghar’ or ‘kotha’ was considered ‘debauchery’ a practice of ‘morally low and corrupt’ male offspring of riches and aristocracy or, at best, it was a privilege of nawabs (ruler) or royals to have them as courtesan singers.
But the advent of the gramophone and its launch in India in the late 19th century was set to change the way ‘tawaif’s music was perceived and heard. It liberated their music from the four walls of ‘kothas’ or ‘jalsaghar’ and brought it into the drawing rooms of the middle class.
“Gramophone democratised baijis’ music. Anyone could listen to them anywhere. Anyone who had little money could buy it like a typewriter or a sewing machine. Gramophone gave the singers an opportunity to reach tens and thousands of people at once. They became an inseparable part of the middle class. Thus, earning them the respectability if the middle class,” said photographer Parthiv Shah.
Shah, along with his classical musician wife Vidya, has put an exhibition “Women on Record” at Indira Gandhi Centre for the Arts in New Delhi. The exhibition, a result of one-and-half-year’s hard work, gives a glimpse of the lives of these professional singers and their quick transition into ‘gramophone celebrities’ over a century ago.
With gramophones housewives too could listen and sing along with “disembodied voices” who otherwise could never dare “to attend their soiress to their salons,” read a panel at the exhibition. Visiting a ‘kotha’ was a taboo for a respectable person.
Gramophone widened the reach of singers by manifold and became instrumental in generating middle class’s appreciation for them.

The exhibition, which is on till April 13, takes one back to late 19th century when gramophone recording companies saw a big market in India. Heading to ‘gaanewalis’ was a natural choice.
“The engineers of these companies would come to India for talent hunt, to get these singers to record and scale their lengthy ragas to one to three minutes,” said Shah, adding, “these immensely talented women were famous in certain quarters for their singing repertoire but certainly they were not widely known women. But gramophone did them this favour.”
The exhibition showcases the singers who stood out amongst hundreds of women artistes who recorded at the turn of the century.

In 1901 Gramophone and Typewriter Ltd set up its first branch outside the UK in Kolkata then known as Calcutta and a year later Gauhar Jan became the first lady singer to cut her album and become the superstar of the new century. 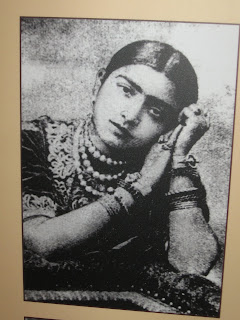 “She successfully adapted to the difficult task of recording for gramophone discs. Through her gramophone records, Gauhar became a legendary figure all over India. She had earned fame and fortune far beyond the reach of any other artiste of her day,” reads a panel at the exhibition.

The popularity of gramophone records can be gauzed by the fact that “over 500 artistes were recorded in different regional languages all over India. These artistes, mostly baijis, underwent received rigorous training from the great ustads (teachers) of those days.”

Artistes would record their name at the end of their songs to establish their authorship which would also help engineers to have the information about the artist and the song for publishing.
Like, Acchan Bai ended her recording with ‘Acchan Bai ka gaana, gramophone record.'
Recalling her experience with the recording industry, the Kirana exponent Gangubai has been quoted at the expo: “For my first recording when His Master’s Voice (HMV) invited me to Bombay I went because they were taking care of my journey and sight seeing. Later, they gave me Rs400 for my third recording but my family was annoyed as my name read Gandhari Hubai on the record.”

Recording in those would take place once a year when an engineer of a recording company would travel to India for two three months.


Jaddan Bai, a popular singer, music composer, actress and film maker of Bollywood and the mother of a well known actress, Nargis, was first to acknowledge and reap the benefits of the new technology. 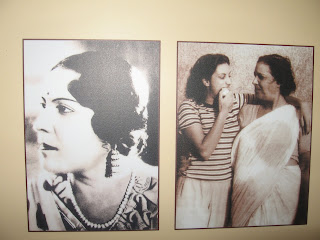 Jaddan launched her own company, Sangeet Movietone, and in her very first film, Madam Fashion, she gave a role to her daughter Nargis, whom she had kept away from music and dance. A photograph of the mother-daughter duo makes a lovely sight at the exhibition.

“Jaddan always had great compassion for professional tawaifs and she expressed this through some of the films she produced under her own banner, including the autobiographical, “Jeevan Sapna”, “Darogaji” and “Talash-i-hak”,” reads another panel.


The exhibition is a treasure trove of many interesting stories regarding the women singers who stood out among the rest in the gramophone era. Like Janaki Bai, blessed with a terrific voice range, was once showered with 14,000 coins during her performance but her talent also earned her 56 knife scars from a jealous ruffian which got her the title of “chappan churi”.

These divas with their magical voices stole many hearts, turned many crazy.
Begum Akhtar, almost synonymous with ghazal singing, had to deal with her crazy fans. A story goes that when her song “diwana banana hai to deewanan bana de” (which can be loosely translated like “Turn me crazy if you want to) became hugely popular in 1933, a fan who after hearing the song wrote words “Hai Akhtari” (oh Akhtari) over and over again in front of her home for the distance of a furlong.
With fame and name came unprecedented money and these divas would strut their stuff.
Fred Gaisberg, the first representative of the Gramophone company who came to Calcutta in 1902, wrote an interesting account of Gauhar Jan.
“She was an Armenian Jewess who could sing in 20 languages and dialects. Her fee was Rs 300 per evening and she used to make a brave show when she drove at sundown on a ‘maidan’ (field) in a carriage, hers were among the 600 records which proved a firm foundation for our new enterprise… every time she came to record she amazed us by appearing in a new gown… each one more elaborate than the last. She never wore the same jewels twice. Strikingly effective were her delicate black gauze draperies embroidered with real gold lace, arranged so as to present a tempting view of bare leg and a naked navel. She was always bien soignée,” wrote Gaisberg.
Similarly, Bai Sundera Bai of Pune was fond of luxury. She, who had cut about 100 rpm gramophone records and awarded gold medal by HMV for highest sale of records, took two cars and hired top floor of empire hotel in Bombay. She later owned a record company, Nabharat.
Name, fame and money gradually paved the way for wide recognition and acceptance. And eventually Kesar Bai Kerkar (1892-1977), the singing star of her time, got top honour when her voice was sent to space by NASA in 197 7. She recorded 13 titles with HMV and four with Broadcast.
From ‘kotha’ to Nasa that was quite an upward journey. It must have given them more confidence and a sense of equality. Gauhar Jan singing Rabindran Nath Tagore’s songs, with his permission, and adapting to her tunes was a quite prestigious as it was considered a privilege which was not allowed to others till the recent ending of the copyright on Tagore’s composition.
These rising stars, singing a more ‘respectable tune’ for themselves, were the first women in the groove. Gramophone was the single instrument that catapulted them to name, fame and eventually social acceptance and respect.
Posted by hemlata at 00:37